The most popular format of advertisements in Google AdWords system are text advertisements appearing in Google search results for specific keywords. These are so-called sponsored links. They appear at the top and at the bottom of natural search results and are marked as Advertisement. Many people do not distinguish natural results (being the effect of positioning) and entries from Google AdWords system. Above natural results there are usually up to 4 sponsored entries, therefore it is worth to invest in paid AdWords advertisement besides investing in positioning. After clicking on such sponsored advertisement, the user is redirected to Your website.

In the case of sponsored links the big advantage is that we can set up advertisement for You for any number of keywords and locations chosen by You. We will check, which keywords fulfill best your business objectives and there we will move advertising budget.

As we mentioned, in the case of sponsored links, we can determine the list of keywords, for which advertisement will be displayed. In the case of shopping campaigns, situation is a bit different. Google decides itself, for which keywords the advertisement of given product will appear. It does this on the basis of information contained in so-called product file. It takes into consideration among others name of the product, description, category of the product and set rates.

In the case of product campaign, we do not have to advertise all products from the offer of the shop. We can advertise for example selected categories of products, high-margin products, bestsellers, seasonal products or products, which are in stock.

We can direct advertisements among others based on location, demography, interests of users, shopping intentions, in selected destinations or websites assigned to specific subject matter. We can also use the function of remarketing, i.e. direct advertisements to people who already visited the website.

The question concerning it, what is better AdWords or positioning appears quite often. We will not answer it unequivocally, because much depends on the business, which You run. In many cases the best solution will be the synergy of both actions.

Below we compiled small comparison of SEO and AdWords, taking into consideration among others time of waiting for effects, longevity of effects, flexibility.

Time of waiting for effects

Many customers expect immediate results from marketing actions. How does AdWords go in comparison with positioning with regard to the speed of achieving effects? If we understand as effect the visibility of website in Google search results for specific queries, Google AdWords advertisement is unrivalled. If you have appropriate budget, properly configured campaign and Your advertisement and website are in accordance with AdWords principles, mostly after few minutes Your advertisements can be displayed at the very top of search results for keywords selected by You.

In the case of positioning, the way to achieve satisfying positions is much longer. Positioning requires time and regular actions. Unfortunately it is necessary to wait for results – half a year, a year, a year and a half … Unfortunately neither we nor any other SEO agency are able to guarantee achieving results within specific time due to changing algorithms of Google. I do not know if You know, but Google does not like, if w we influence search results and from time to time it changes its algorithm of setting position, what causes that taken actions, which once influenced significantly improving position, become ineffective. It can be said that it is such playing cat and mouse with Google. Supposedly there are over 200 ranking factors, which Google takes into consideration in its algorithm.

Summing up, if You want to achieve effects quickly or You run seasonal business and You want to take advantage of the hottest period in Your industry, Google AdWords campaign will be good solution.

And how do Google AdWords campaigns go in relation to positioning, if we compare the longevity of effects? In the case of paid sponsored AdWords links, you pay Google for each click on Your advertisement. And it is simple. If you pay, Your advertisements will be displayed. Is the budget over? Displaying is also finished.

In the case of regular work on positioning website, it is usually possible to achieve relatively stable positions. Of course not for free. Although You do not pay here for clicks, developing website and acquiring external links costs, regardless of it, if you will take this actions on Your own or if You commission them external company. You have to also know that the situation may occur that website, which so far had stable positions, will lose them. The reason can be the change of Google algorithm.

Supposedly You are also interested in it, what will happen if You will finish cooperation with seo agency. Will website at once “fall down” in search results? We will not give You unambiguous answer here, because much depends on the contract, which You will sign/signed. If for example links to Your website are placed mainly on websites belonging to positioning company (so-called positioning base), in the majority of cases after ceasing paying for the service of positioning, the links will be removed. Such actions can result in the loss of previously worked out positions.

In the case of positioning there are not so much flexibility. Deciding on new keywords it is necessary to perform great number of actions to begin a battle for high positions. The problem also occurs, when You want to begin providing services in other locations than these locations, for which website was so far positioned.

Due to the lack of flexibility it is very important in positioning to prepare good strategy and adjust the structure of website to current actions of the company and also to its future activities.

What do I pay for? How does the process of optimization of Google Ads campaign look?

Supposedly like everybody You would like to know, what You will pay for, when You will decide on cooperation with our agency. Firstly You have to know that it is not enough to set up just AdWords advertising campaign, but it is necessary to work on it. The competition also works on their campaigns. It is not so that if at given moment Your advertisement is displayed for given keyword in the first position, it will remain so. It is very dynamic situation. We analyze the situation on ongoing basis and we strive for it that the campaign brings You the highest possible profits and generates simultaneously the lowest possible costs. For this purpose we take a number of optimization actions. Below we describe a few of them.

In text AdWords campaigns in Google search results (so-called sponsored AdWords links) for each keyword, Google evaluates so-called quality coefficient on a scale from 1 to 10. In short the more the website and advertisement are matched to queries entered into internet search engine, the more people click on Your advertisements, the higher the coefficient is.

For example You can pay for clicking on advertisement 1 Zloty and Your competitors can pay 4 Zloty for the same keyword with advertisement in similar position in search results. It happens so just due to the quality coefficient. You do not fight with Your competition only with price, but above all with quality. 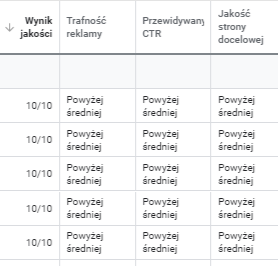 We test headings, contents and extensions of advertisements in sponsored AdWords links.

We work on creating text advertisements, which will be adapted to queries of users and will simultaneously attract attention. Mostly for each keyword we prepare 3 different text advertisements. We examine, if advertisements for example with “free delivery” or maybe “promotion -20%” in heading are clicked more often. When we already collect enough data, we withhold the poorest advertisement and create a new advertisement instead of it. We repeat this process in continuous way.

We analyze reports of devices, locations and advertising schedule with regard to the effectiveness of AdWords campaigns.

Google provides us a number of data, whose analysis allows us to manage better our advertising budget. We can adapt the rates for particular keywords depending on the location of user, the device, which user applies or time, at which we display him advertisements.

For example if You provide services in several cities, it can turn out that in some of them potential Customers decide much more willingly to acquire the service just from You. In such situation we will want to allocate larger budgets just to these cities than to other cities. We will also adapt the rates, so that in cities with higher sales advertisements are displayed appropriately high.

And maybe you run company providing breakdown services? In this industry it is natural that the majority of people will seek help, when they are on the road. Here high displaying advertisements for mobile users will be important.

We analyze reports of searched keywords

In the case of sponsored Google AdWords links we apply different types of matching keyword. Strict matching means that the user has to enter into Google internet search engine exactly the same query as keyword, which we will place in AdWords panel.

Our work consists in analyzing reports of searched words with regard to their effectiveness and finding also these wrong keywords and excluding them.

Auditing various accounts we meet very often ignorance concerning the operation of types of matching words, what in many cases is related to spending major part of the budget on wrong keywords.

We test various formats of advertisements and methods of directing

Each type of advertisements has a number of settings, which we can test. For example in the case of banner campaigns we have to decide, which banners we will display, for whom and where.

As You see, working on AdWords campaign, is continuous testing.

You have to know that Google AdWords introduces recently a number of changes with regard to advertising possibilities. New formats of advertisements and methods of directing appear. We think that it is very important to be ahead of the competition, always one step ahead. If You decide on cooperation with our agency, You can be sure that all new changes in AdWords will be implemented in Your advertising account within short time after announcing them.

As we mentioned, these are only a few of elements, which we perform working with AdWords campaigns. It is impossible to pass on in one article long-term knowledge in the scope of optimization of campaigns.

Leave the competition behind